Ablaze Publishing
Coming in April & June!
THE CIMMERIAN:
IRON SHADOWS IN THE MOON #1

Writer: Robert E. Howard, Virginie Augustin
Art: Virginie Augustin
Cover A: Brian Level
Cover B: Virginie Augustin
Cover C: Kajo Baldisimo
Cover D: Fritz Casas
Robert E. Howard's Conan is brought to life UNCENSORED!
Discover the true Conan, unrestrained, violent, and sexual.  Read the story as he intended!
A young woman in danger is pursued by her vile master. Conan, whose family has just been wiped out by this same master, puts an end to the beauty's pursuer, and saves her with a blow of his sword. Bound by fate, the couple decide to hit the road together. Their journey takes them to an island where they discover strange ruins inhabited by dark magic. Their paradise-like refuge soon turns into a suffocating nightmare where shadows lurk. Who knows the extent of the dangers that lie there?   They will quickly learn that on an island, the biggest threat does not always come from the outside...
Iron Shadows in the Moon reveals the genius of its author in describing universes as singular as they are mysterious. With her line, both delicate and powerful, Virginie Augustin illustrates this oppressive and mystical atmosphere, and gives the story a new graphic breath.
Full Color, 7x10, 32 pages, $3.99, On sale April 7. 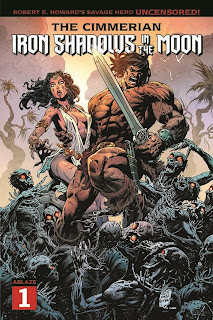 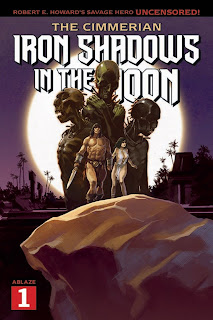 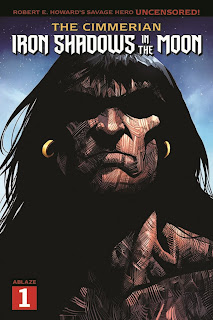 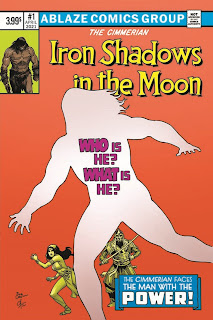 THE CIMMERIAN VOLUME 2
THE FROST GIANTS DAUGHTER &
THE PEOPLE OF HE BLACK CIRCLE
Writers: Sylvain Runberg, Robin Recht
Art: Jae Kwang Park, Robin Recht
Cover: Robin Recht, Jae Kwang Park
BY CROM!
Robert E. Howard's famous Cimmerian UNCENSORED!
Discover the true Conan, unrestrained, violent, and sexual. Read the story as he intended!
The Cimmerian Vol 2 includes two complete stories, The People of The Black Circle, and The Frost-Giant's Daughter, plus bonus material, including the original prose stories, in one hardcover collection!
In The People of the Black Circle, the king has just died in the kingdom of Vendhya, struck down by the spells of the black prophets of Yimsha. The king's sister, Yasmina, decides to avenge him…and contacts Conan. Sylvain Runberg and prodigious designer/illustrator Jae Kwang Park adapt one of the most ambitious and complex Conan stories of Robert E. Howard. An adventure where epic battles, witchcraft and plots mingle in a mystical and scary Orient. Where revenge is an art…
In The Frost-Giant's Daughter, Conan, the only survivor of a ferocious battle, sits in the midst of a bloodstained snow field. When the fight is over, the Cimmerian suddenly finds himself overcome with deep weariness and disgust. Until the moment he meets a redheaded woman of supernatural beauty, blinding like the glow of the sun on the snow. A mythical tale both in both form and substance, The Frost-Giant's Daughter is masterfully adapted by Robin Recht, who manages to capture the essence of this whirlwind tale of violent desire…a true love trap in which the force of will of the Cimmerian is put to the test.
Hardcover, 7x10, 168 pages, Full Color, $24.99, On sale June 2. 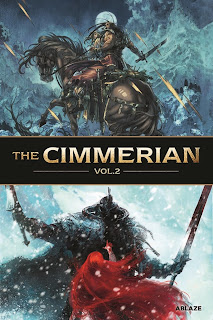