The Cthulhu Stories of Robert E. Howard
Coming in September!

The Great Old Ones Return...

In the early twentieth-century, in the pages of Weird Tales and other pulp magazines, H.P. Lovecraft created the Cthulhu Mythos and offered it to his friends, creating a shared mythology for much of their weird fiction. Robert E. Howard, creator of Conan the Barbarian, was one of those good friends.

Fresh from dusty libraries dark with forbidden knowledge, these twelve Howard tales, bring Kull of Atlantis, Bran Mak Morn, and a steady band of warriors, adventurers, and scholars into the dark to face the Nameless and that which they left behind: Elder gods, nameless cosmic horrors greater and older than the gods themselves, ancient forms of life and worship from before the dawn of humanity.

These are the Cthulhu Stories of Robert. E. Howard

Thanks to Terry Allen for the tip! 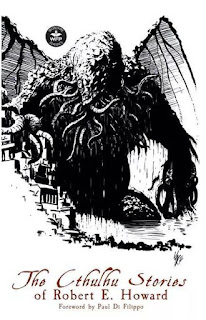